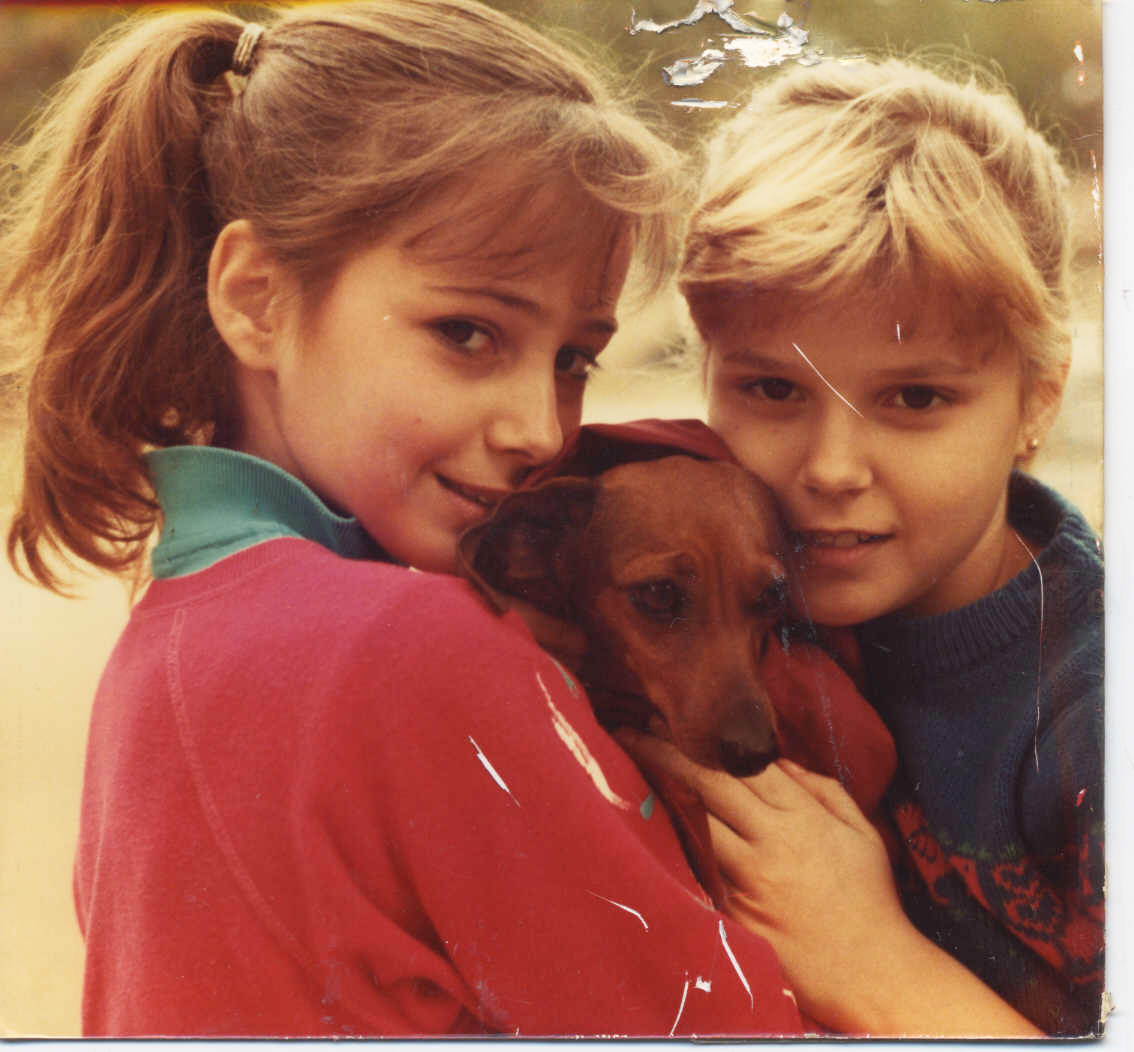 Once upon a time, there were four little girls who begged for a dog.

Their names were Ella, Sophie, Marie Claire, and Camille.

American Girl dolls are great, but we want a live and furry friend!

“No,” said their parents, their voices firm and adamant. “Absolutely not.”

The little girls pushed. They whined. They cried and gave their parents a major guilt trip about being the ONLY FAMILY ON EARTH that didn’t have a dog. But the parents didn’t budge. They were united, and they told the girls that maybe, just maybe, they’d get a dog in a few years when everyone was older and more responsible. Until then, the issue was moot.

Time passed, and every so often, one of the girls would come home from a friend’s house begging for a dog. Immediately her sisters would chime in, making it a four-against-two debate as the kids pressured and pushed the parents again. But the parents stood their ground…even as tears were shed and angry little feet stomped across the kitchen floor.

“Maybe one day,” their parents said, “but not now. We aren’t ready. Our plate is too full.”

The girls couldn’t understand why a dog was out of the question. So what if a tree had just fallen on their home, and the family was living in a rental due to renovations? Was that any excuse to deprive them of this joy? There was also an underlying issue, one that couldn’t easily be settled: Neither parent was a dog person. Both the mother and father had dogs growing up that they loved dearly – Peppy and Bandit – but that’s as far as their animal affection ever went.

In all honesty, the parents had zero desire for a pet. Life was good already; why complicate matters with a dog?

The mother with her only canine love, Peppy (aka “Peppermint Patty”)

Then one day, Ella and Sophie had an idea. Maybe if they started praying for their parents to change their mind, their dream would come true. It was worth a shot, because by this point they were desperate.

But all hope was not lost, because the holidays were coming up, and that gave the girls another brilliant idea: SANTA CLAUS!!! Of course he would come through! Wasn’t he the king of making dreams come true? Surely Santa would make 2012 the year they got a dog.

The girls were so excited they could hardly wait. And while playing outside one day, they confided to a neighbor that while their parents weren’t ready for a dog, they knew Santa would make it happen. When the neighbor shared this tidbit with Santa, Santa grew concerned. With Christmas only a week away, he didn’t want those four little girls waking up to a major disappointment.

With a heavy heart, Santa wrote a note to the Kampakis girls. He assured them that while their parents were closer to getting a dog, they weren’t there yet. And without the parents’ blessing, Santa couldn’t bring live animals as a Christmas gift.

A few tears were cried when the girls found this note, but less than expected. It was a still a great Christmas, and for that the parents were grateful.

It was early in the new year, January 2013, when something changed. Maybe it was the girls’ prayers taking effect, maybe it was the parents being worn down by four persistent kids, but the subject of a family dog stopped being met with resistance. With the door cracked opened, the girls pounced. They began researching different breeds and presenting their findings.

As the Kampakises talked to other families about good breeds for children, one that kept being mentioned were mini-goldendoodles. Since a lot of families in the area had had a great experience with a breeder in Springville, Alabama, they decided she’d be their source.

When the father called the owner, Diane Cox, she invited them to come up one Saturday to see her latest litter. “We’re just looking,” the parents told their four daughters, but the girls were still giddy. At last they’d broken their parents! What an accomplishment!

That day at the breeder, the Kampakis family fell in love with mini-goldendoodle puppies. They found them to be the cuddliest, most irresistible creatures ever.

Warning: Do not test the merchandise unless you’re ready to buy.

The biggest surprise was the mother of the Kampakis girls, who couldn’t get enough of these animals. As she left the barn empty-handed, leaving behind the puppies that had filled her hands and heart for the past hour, a strange sadness came over her. She felt like she was leaving the hospital without her baby. Then and there, she decided a dog wasn’t such a bad idea after all.

The next day, she went shopping.

She bought a crate.

And toys, leashes, and bones.

After she came home, she and her daughters talked about dog names. They agreed they wanted a girl. After tossing around options, they decided to go with “Lola Claire.”

In April 2013, the Kampakises returned to Springville to choose Lola from a new litter. Since the puppies were almost 6 weeks, they’d soon be ready for new owners. After passing the puppies around to see who cuddled the best, and debating between the girl with beautiful white fur and her brother with golden fur, Ella, Sophie, Marie Claire, and Camille chose The One. It was a happy, happy day.

Lola came home on Mother’s Day weekend. Daddy surprised the girls by bringing her in the front door on Saturday morning (along with Krispy Kreme donuts). It was a joyful, squealing, unforgettable day. Lots of friends and family came by to meet Lola and tell the parents, “Congratulations! It’s about time you got these poor girls a dog!”

In celebrating the one-year anniversary of “Life with Lola”, the Kampakis family has lots of funny, frustrating, and heart-warming stories to tell. Truth be told, Lola is a diva. She hates going outside when it rains because it gets her princess paws wet. Often when the family comes home, they find her napping on the master bedroom bed. She has ruined Camille’s Barbie doll collection by chewing off hands, arms, and legs. She still has occasional accidents in the house and sometimes barks obnoxiously at visitors.

But on the flip side, Lola is sweet, affectionate, and loving. She adores her family and brings out the maternal instincts in her big sisters. The best part of Lola is her influence on the family dynamic. She draws everyone closer together because in their own way, each family member is smitten.

Only your family can decide if and when you’re ready for a pet. But if there’s any lesson to take away here, it’s that hearts and minds can change. Owning a dog is kind of like having a child – you don’t know what you’re missing until you experience it for yourself. Yes, a pet can complicate life, but the joy, laughter, and unity they bring makes those complications worth it.

Remember the parents who were not dog people to begin with? Well, they now let Lola sleep in their bed at night. Sometimes she wakes them up to lick all over their face. It’s an inopportune time to show love, no doubt, but there’s no questioning her motive. Lola isn’t angling for a favor; she simply likes to show affection to those she knows and trusts.

Adding a family dog is a big decision. You’re taking on another mouth to feed, and that’s a commitment. But what you get back is a faithful friend who creates priceless memories your family will laugh about for years and years to come.

You’ll think it’s just the kids getting attached…and then one day, you’ll realize you’ve grown attached, too. The dog you once resisted has finagled her way into your heart, and though you still don’t consider yourself an animal lover, you’ll make an exception for her, because what she brings out of you is real and genuine love.