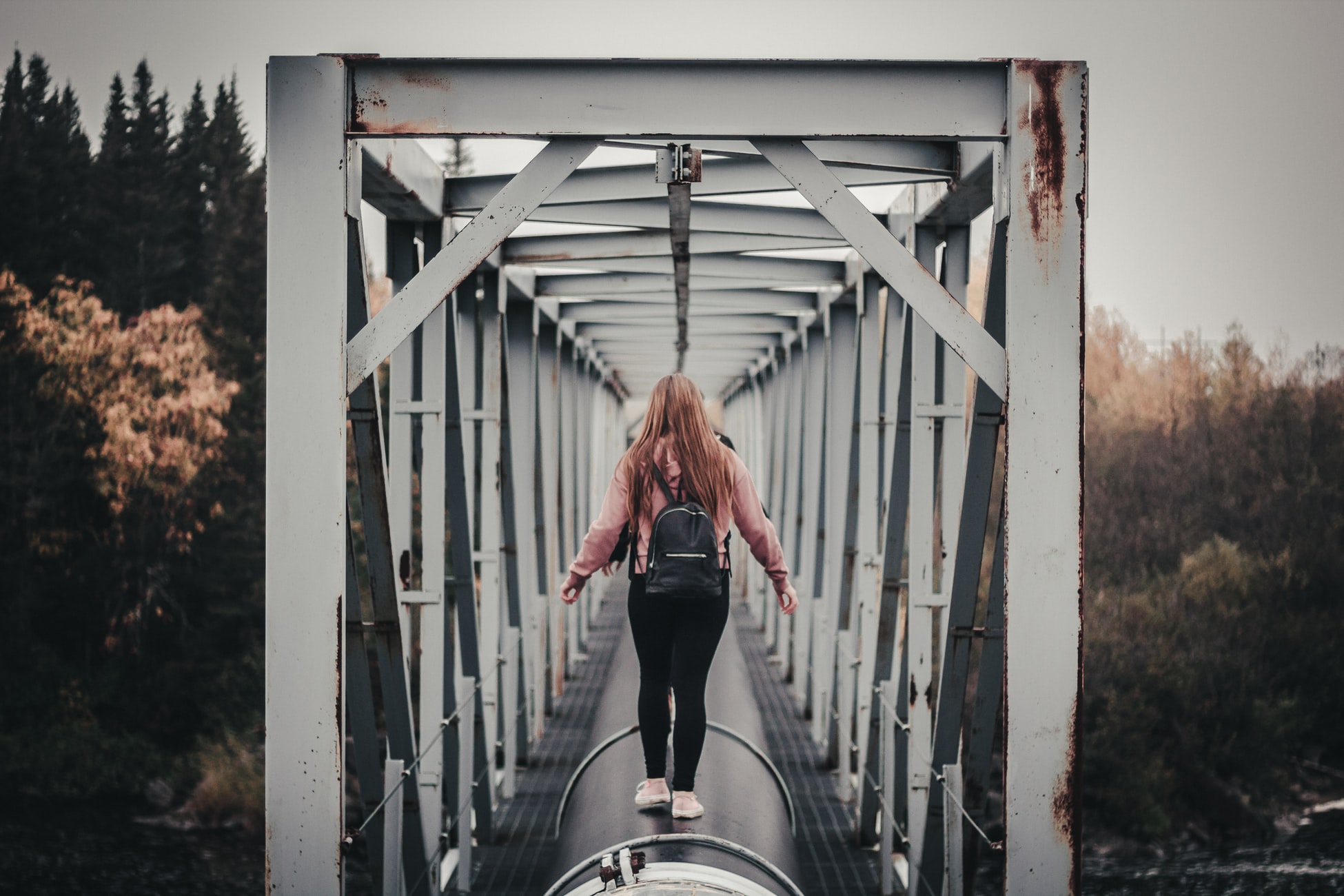 I was pregnant with my third child and waiting to see the doctor.

In the waiting room, an older woman asked me if I knew the baby’s gender. As I told her it was a girl – my third daughter – she and two ladies nearby exchanged glances and moaned. They all had adolescent daughters, and with despair in their voices they told me:

“Just wait until they’re teenagers. You’re really in for it!”

I’d heard this cliché before, and I chalked these mothers up as Debbie Downers and forgot about their gloomy forecast until I started to hear this script again…and again…and again. You see, when you have four daughters like I do now, that is the #1 narrative that older moms share.

For years my goal was to prove them wrong. I promised myself, My daughters won’t be like that. We’ll always be close, and I will not look like these stressed out, strung out, exhausted moms in the throes of raising teenagers.

This goal seemed doable until my daughter started middle school and we started to fight – and I became the stressed out, exhausted mom of a teen girl. From the back of my mind, I pulled out the narrative that I’d heard too many times to count.

Those moms were right! Everyone has warned me about teenagers, and now their predictions are coming true! The answer, I assured myself, was to navigate this new teen territory by digging in my heels and firmly taking control. Otherwise, this daughter and her three sisters would walk all over me.

After all, it was my daughter’s attitude, moodiness, and sass that had disrupted our once loving dynamic. If anyone needed to change, it was her, not me.

The tension between us continued to grow until I had a breakdown one morning after yelling at her before school. In the peace of a quiet home, I regretted that fight and every silly fight before it.

I hated how coldly I’d acted toward my child, and as that truth sank in – as I quit making excuses and justifying harsh arguments – I fell to my knees and begged God to help me restore our rocky relationship.

That day was my wake-up call. It marks the moment that I took a hard look at myself and admitted how my pride and refusal to apologize for my wrongs played a big role in the problem. I was not acting like the adult in this relationship, and it took a lot of soul-searching to admit this.

That rock-bottom moment that I planned to admit to no one later became the inspiration behind my new book for moms of teen girls that releases August 18. This book is what I wish someone had handed me as 5 years ago I struggled to find my footing in parenting a teenager and loving a teenager, aiming to be the strong mom my daughters need while also building a bridge between their hearts and mine.

In researching this book, I Googled “teenage daughters” and was saddened by the overwhelmingly negative results. They all aligned with the script that moms with baby girls are handed.

I know teenagers can be challenging, perplexing, and frustrating – yet we do our teenagers a real disservice when we settle for the belief that our best hope is to just “survive” them.

Personally, I want more, and I’ve found that aiming for more with my 3 teenage daughters and 1 pre-teen daughter brings more joy and connection. I’ve discovered that parenting by negative scripts deepens the divide and leads our teenagers to go elsewhere for love, support, and guidance.

So how do we set rules and boundaries – and do our jobs as parents – and still foster a warm home environment? How do we stay calm as our daughters (or sons) push our buttons, test our patience, or make crazy requests in their quest for independence? How do we fight for our daughters rather than with our daughters, showing them we’re on their team as they navigate an increasingly complex world?

1. Remember anger can be a grenade. In The 5 Love Languages of Teenagers, Dr. Gary Chapman says, “In more than thirty years of marriage and family counseling, I have often wept as teenagers have recounted the painful words and destructive behavior of parents whose anger was out of control. What is even more tragic is the many young adults who were abused as teenagers and now find themselves treating their own children in the same manner their parents treated them.”

We all say hurtful things, yet it’s up to parents to model maturity when emotions run high. We all have habits and reactions that aren’t healthy, and what often needs to change first is our response to hard situations. By admitting and breaking bad cycles, we allow healthier habits to form, prevent generational dysfunction, and set the example our teenagers need.

2. See conflict as an opportunity to teach conflict resolution skills. According to John Gottman, America’s top couples therapist, the #1 predictor of success in marriage is how well two people can resolve conflict.

“In every good relationship,” he says, couples have “repairing skills, and they repair early.”

Any relationship that lasts long enough will have conflict. So when you and your daughter argue, consider it a learning ground. You can teach her, within the safety of your love, how to respectfully work through differences.

By calmly expressing herself, your daughter gains assertiveness skills. By listening to your side, she gains empathy. By speaking the truth in love, she discovers the power of the right words. Together these skills grow your relationship and teach your daughter how to reconcile problems. They turn arguments into life lessons that set her up to win in her friendships, her career, and even her marriage.

3. Circle back around after a fight. After my wake-up call with my daughter, I needed a new approach. I saw a friend at the gym that day and asked how she handles fights with her daughter. She shared great advice.

“After an argument,” she said, “you’ve got to circle back around. Go back when you’re calm and have had time to think. Apologize, talk it out, and try to do better next time.”

I apologized that afternoon and told my daughter how sad I’d been about our recent fighting. She admitted that she’d been sad too. I asked if I’d done anything to upset her, and I expected her to say no, but she didn’t. Instead, she said I’d become more critical and harder to please. This threw me for a loop, yet she was right; I had become more critical. I’d become extra-critical of myself and was projecting that on her.

Owning up to my mistakes turned our relationship around. It taught me a lesson: Teenagers respect honesty. They’re okay with a parent who’s not perfect, but they’re not okay with a parent who acts perfect and tries to shift all the blame to them. We all mess up, so when you slip, circle back around. Repair the damage quickly, aim for reconciliation, and ask your daughter if you have blind spot that may be hurting your relationship.

4. Find a safe place to vent. My friend’s daughter was a star athlete in high school. As captain of her team, her younger teammates looked up to her, and everyone respected her. She kept their respect by following her mom’s advice.

“Stay positive around your teammates,” her mom said. “Don’t complain, vent, or talk about anyone. Save it for me. Vent to me and give your best to your team. Encourage them and be a role model.”

Too often, we vent to anyone who will listen. We vent on social media – or to total strangers. We unleash on our kids or tell our teenagers that they are bratty or self-centered. And as we do this, we lose respect. We dampen our credibility and weaken our relationships.

I understand a parent’s breaking point, yet unfiltered outbursts can cause serious damage. Teenagers look tough externally, but internally they are tender, and they long for their parents’ approval.

Still, we all need a place to vent, and that’s why it helps to have someone – your friend, sister, spouse, therapist, hairdresser, etc. – who lets you rant and won’t betray your confidence. Having a steel vault who keeps your secrets safe helps you stay strong in front of your daughter.

It also makes you less likely to drop a bomb in the heat of the moment. It gives you an ally to laugh with as you admit what you wanted to say to your daughter versus what you actually said.

5. Listen, pick your battles, and negotiate occasionally. Some issues aren’t worth the fight, and not every conversation should be a confrontation.

Dr. Lisa Damour, author of Untangled, says, “When teens are trapped with parents who would rather flaunt their power than negotiate on even minor points, it doesn’t always end so well. These parents don’t just damage their relationships with their daughters, they can also provoke girls into proving that they will not be controlled.”

Nobody likes a dictator, and nobody feels close to a parent who’s always on a power trip. Sometimes, after listening to your daughter explain why she’s asking for a privilege, you may change your mind. You may adjust a rule that needs updating anyway. Your daughter is less likely to fight your non-negotiable decisions if you negotiate on occasion. Save arguments for when you mean business, and pick battles that are worth the fight.

In short, your teenage daughter needs you. She has the entire world telling her what is wrong with her, and she needs a mother who loves her and tells her what is right with her.

Society is quick to commiserate over the misery of teenage girls. The conversations start at the cradle and become self-fulfilling prophecies. It is time to update this script. We can be realistic yet optimistic, parenting with a spirit of strength and hope.

Teenagers are challenging and also remarkable. They long to be appreciated and have their hidden potential noticed and pointed out. See the good in your daughter, fight for her well-being and health, and enjoy her. Treat her last years at home as more than a season to “survive,” and get to know the beautiful soul who is growing up before your eyes and offering you the priceless gift of a mother-daughter connection.

Thanks for reading this message today. If you enjoyed it, please share it on social media or listen to it on the Girl Mom Podcast.

I’ve also written books for teen girls, 10 Ultimate Truths Girls Should Know and Liked, used widely across the U.S. for small group studies. To keep up with future posts, subscribe to this blog or join me on Facebook and Instagram.