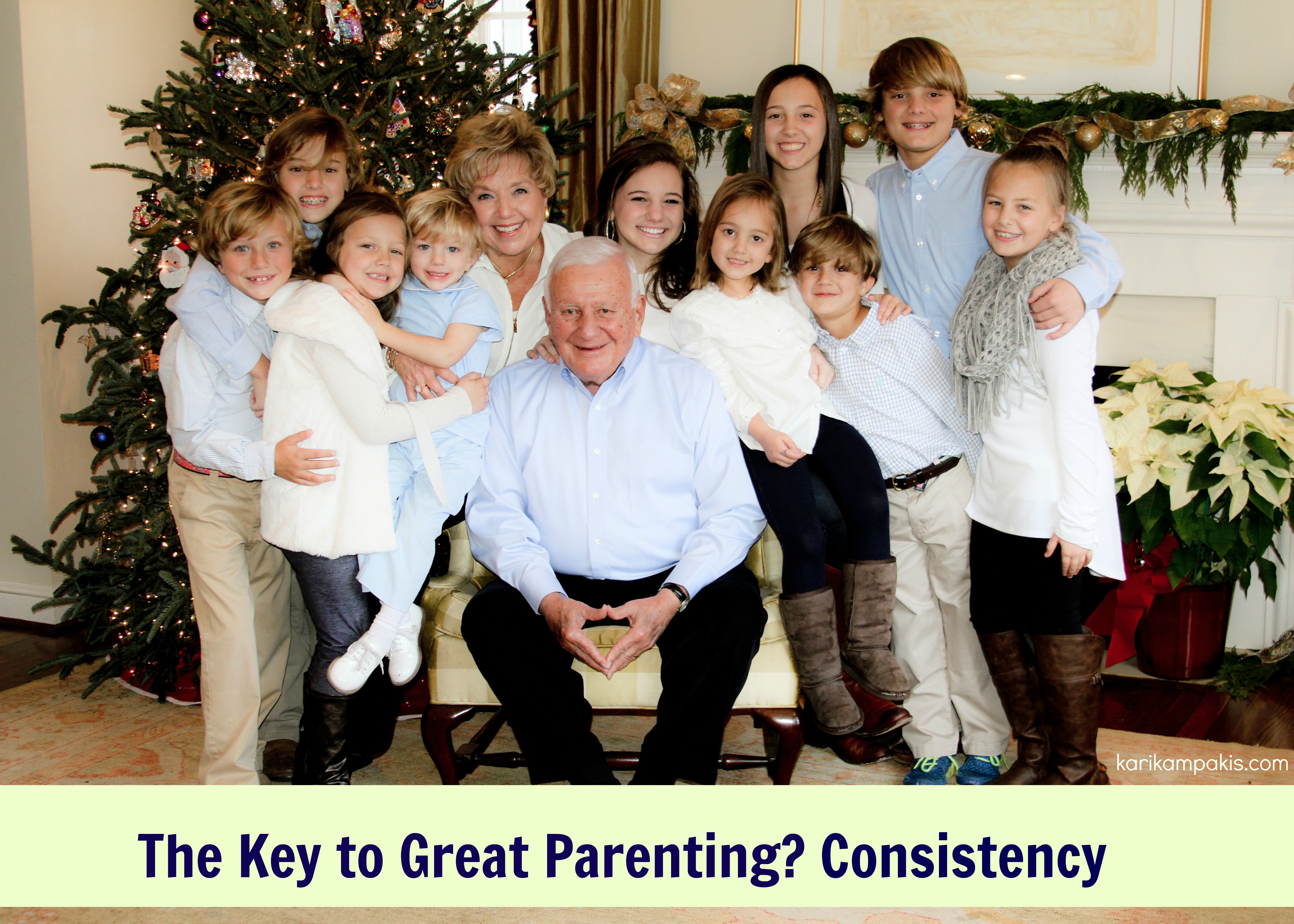 My sweet father-in-law, Nestor Kampakis, passed away unexpectedly this past New Year’s Eve. Although he had Alzheimer’s, his death was a shock, altering the landscape of 2016 for our family.

Papou was a good soul and everything you’d hope for in a father: kind, loving, protective, wise, honest, committed, and faithful. He adored his family and loved anyone whom his children loved, because if someone was important to his child, they were important to him too.

After Papou died, I sat down with Harry and his two sisters to help Harry with his eulogy. We cried and laughed as we recalled our favorite memories of Papou, from famous words of wisdom like “If you go to bed with dogs, you’re going to wake up with fleas” to stories of him patiently teaching his kids to water ski and pulling them all day on the boat.

As Harry wrote his eulogy, he noticed a theme to his father’s life. What made Papou a wonderful husband, father, grandfather, and friend could really be summed up in one word.

You see, Papou wasn’t the type to make New Year’s resolutions that only lasted a month. He didn’t jump on the bandwagon of hot new trends and hop from one opportunity to another, always looking for some get-rich-quick scheme.

Instead, Papou lived a life of quiet commitment. He was faithful and firm, the kind of father who kept his word, showed up, and followed through on his decisions.

When his oldest daughter, Renee, was in first grade, for instance, she came home from school one day admitting that she’d lied to her teacher. The teacher had asked the kids where they went to church, and since their family had moved to Gadsden, they’d stopped going to church because the closest Greek Orthodox church was in Birmingham.

Immediately Papou made a decision. On Sunday mornings, he and his family would begin driving to Birmingham to attend church. An hour there and an hour back.

His kids would sometimes complain, of course, but Papou stuck with it. Rarely did their family miss a Sunday service. Today, Harry and his sisters agree that those Sunday drives to church are some of their best childhood memories. They talked about everything during those car rides — school, relationships, life lessons — and bonded over the conversations that resulted.

When Papou’s kids went to college, he wanted a way to keep in touch with them. He decided to start calling each child every morning on his way to work. His calls rolled in like clockwork, and even if Harry and his sisters had been out late the night before, they knew to expect their phones to ring sometime around 8 a.m.

Once Harry and I got engaged a few years later, Papou added me to his call list. “Since you’re going to be my fourth child,” he told me “you’ll get a call too.” Papou kept his promise, calling me at work each morning until I married his son nine months later.

Papou’s death really got me thinking about what makes a great parent — and the kind of legacy I hope to leave. One thing I noticed in the aftermath of his death was the deep sadness in the eyes of those childhood friends who grew up with his kids and considered him an important influence in their lives.

Many old friends called Papou their “second dad.” Others admitted to feeling closer to Papou than they did their own father. Papou always he welcomed his children’s friends into his home. He took a genuine interest in their lives and showed up for every football game, school event, and special gathering that parents were invited to because he loved to be a part of his children’s world.

Celebrating Father’s Day this year will be tough without Papou. I expect there to be a lot of storytelling, tears, and laughter.

And if there’s anything I think we can all learn from this man whose family adored him and whose absence is felt deeply, it’s the importance of being consistent.

This daily grind can make us feel either antsy or stuck. We may wonder what the point is and if the end result is worth it.

Through Papou’s life and death, I’ve seen firsthand what that daily grind can lead to. I’ve witnessed how his commitment as a family man led to a really rich harvest at the end of his life.

The reason Papou become a beloved grandfather whose grown children and grandchildren flocked to him and loved spending time with him is because he had engaged with them since birth. He loved his people fiercely and with great pride. He was a steady, dependable, and predictable presence in our lives, someone who earned the trust and respect of many people by the way he lived his life.

Great parenting is no accident. And of the many habits that made Papou a great example to follow, I believe his habit of honoring his commitments tops the list.

Papou’s daily discipline added up to a really amazing life. And as we settle into life without him, we make it our goal to carry his legacy on, and to try to raise our children with the same values that shaped his parenting and the same beautiful commitment to being present, dependable, and faithfully consistent.