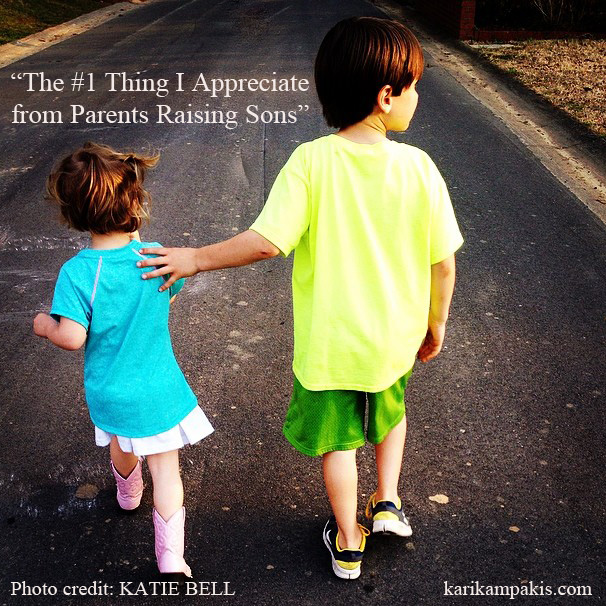 A while back, I was at dinner with my friend Jacki when she shared a story about one of her three sons.

Their family was at the high school for a game, and without consulting his parents, their sixth grade son walked from the school to the neighborhood grocery store with three girls. Because it was dark outside, his parents weren’t happy about it.

One thing Jacki’s learned about raising boys, however, is that when they do something against her wishes, there’s usually a lesson to be learned. And what this incident led to was an important discussion she and her husband, Danny, had with their son later that night.

They asked him, “Do you know what your role was walking with those girls?”

No,” their son replied.

“Your role was to be a protector and a leader,” they told him. “If someone had tried to hurt one of the girls, your job would have been to stand up for them.”

I love how Jacki and Danny intentionally imparted this wisdom. I love how they thought beyond their son’s safety and planted seeds in his young mind that will become increasingly important as he gets older and spends more time with girls. Most of all, I love how they didn’t take their son’s protective instincts for granted, assuming that if trouble had arisen, he would have automatically jumped in front of those girls.

These are kids, after all, and kids aren’t always mindful of watching out for others. While it’s easy to tell a boy, “Be a protector,” the more effective route – and the lesson more likely to sink in – is a real-life application of what it means to be a protector so that his awareness of his role is raised.

As the mom of four girls, I’m particularly grateful for parents like Jacki and Danny who have regular conversations with their sons about being protectors. I’m a little reassured knowing that one day, when my daughters begin socializing with the opposite sex, there will be boys in the mix whose parents drove home the correct definition of what it means to “be a man.” That being a man is not about how athletic you are, how many girlfriends you have, or how much money you make, but how well you protect, love, and take care of others.

Recently my friend Christy Truitt Kyser wrote a blog post about protectors titled Which “P” Are We Raising? In her article, she mentions a wise man who once counseled his teenage daughter about the characteristic of boys.

“They can be protectors or predators,” he told her. “You have to decide which you allow in your life.”

Christy’s post struck a chord with me because 1) it’s true and 2) it’s exactly what I want my daughters to know about boys. While there are some great boys out there, and parents doing a great job raising them, not all boys are equal. Not all boys can be trusted to watch out for girls (or anyone else) and think of them in the proper light.

How our sons and daughters treat each other tomorrow depends largely on the values we instill at home today. That’s why boy moms care about the upbringing of today’s girls like I care about the upbringing of today’s boys, because eventually, all our kids are affected. Eventually our sons and daughters will spend more time together than they spend with us, and because they’re bound to encounter good and bad among the opposite sex, we’re hungry for a little hope that someone will be there to look out for them.

What I appreciate MOST from parents raising boys is raising them to be protectors. Protectors of justice. Protectors of society. Protectors of anyone in danger or potential harm. Yes, girls are strong (sometimes stronger than boys), and in many cases, they can protect themselves with no problem. But sometimes it’s not a fair fight. Sometimes there’s an imbalance that creates an immediate disadvantage. Sometimes there needs to be a male willing to take care of business.

The work you’re doing now, at home, is an investment in the future. And it’s my hope that my daughters and others in their generation will recognize the protectors and let those be the boys they allow in their lives, the boys who have their best interest in mind and will rise to the occasion whenever the need arises.