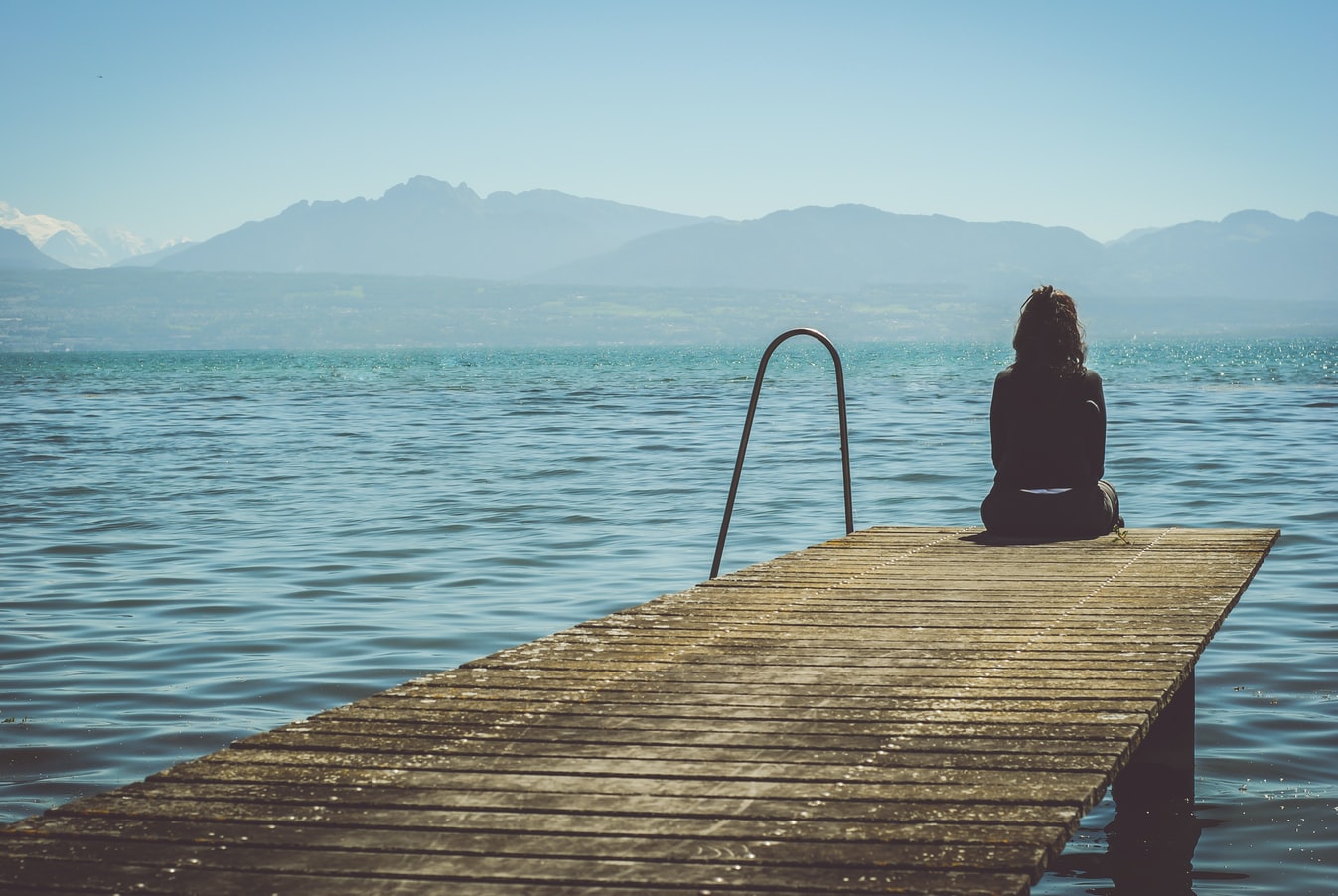 During a Spring Break family trip to a Caribbean island, I got a text from my daughter’s friend.

Help! These guys are begging us to party with them tonight, and they won’t leave us alone.

I reached the girls quickly, thanks to it being a small resort. Sure enough, 5 young men were surrounding and flirting with my daughter and her friend, both 16 years old, as they laid out. The girls were trying to be polite, so I told the guys – who looked to be 20 – that they weren’t interested.

They left, and when my husband arrived, the girls explained how they couldn’t get rid of the guys. They kept pushing the girls to leave the resort, even as they repeatedly turned them down.

With anger crossing his face, my husband’s protective side came out. “Girls,” he said, “you’ve got to be blunt. If blunt doesn’t work, get ugly. Don’t beat around the bush, especially with guys like that. Next time tell them to get lost. Or get up and report them to the front desk.”

It was great advice – yet advice I’d never heard. For many females, being blunt doesn’t come naturally, especially when you’re raised to have good manners. But sometimes, manners must fly out the window, and as we prepare our daughters for the real world, it’s imperative to talk through scenarios that may call for a different voice.

In my new book for moms of teenage girls, I share tips to help your daughter be assertive and speak up. Every girl’s voice deserves to be heard, and every girl needs guidance with using her voice wisely.

At one extreme, there are girls who have a strong voice and say exactly what they think, yet they lack tact and warmth. They can tell boys to get lost, but they struggle in relationships. They hurt feelings, have no social filter, and blurt out rude remarks.

At the other extreme, there are girls with a kind voice. They’re loved and respected – but they don’t speak up. They let people take advantage of them and often feel powerless. When they find their voice, often as grown women, it may be filled with bitterness or resentment due to years of suppressed anger.

Neither extreme is healthy, and the truth is, it’s possible to be strong and kind. Honest and tactful. Assertive and congenial. Respectful when we feel safe – and blunt when we don’t.

Today’s girls need healthy assertion. When you live in a society where people prey on the weak and use their power to get ahead or dominate others, girls should know how to take up for themselves, speak up for the voiceless, protect themselves and others, and effectively express their emotions.

Unfortunately, girls get conflicting advice. I’ve seen articles where moms celebrate their little girls’ defiant, eye-rolling attitudes because they believe this is the way to raise “strong” girls.

Nobody wants a wallflower, but being “strong” isn’t the same as being rude, off-putting, disrespectful, or unkind. There are norms for social behavior, for girls and boys, and those who buck them will suffer. If our daughters (or sons) bring that attitude into work or team projects, they’ll get fired or kicked out. If they bring it into a friendship or marriage, they’ll wreck their relationships. There is an art to being strong and respectful, and without the respectful part, people lose credibility and meaningful connections.

So how do we teach our daughters healthy assertion? How do we help them read situations and find the right voice? Here are 10 conversation points.

1. It’s okay to be rude to stay safe. Guys especially tend to fall into two categories: protectors and predators. Predators can appear harmless (and act like protectors) to get what they want. They often take the path of least resistance, targeting girls who are naïve, vulnerable, unsuspecting, or easy to manipulate.

Don’t let anyone play on your friendliness or give you a guilt-trip. Trust your gut instincts, pay attention to red flags, and know that when a situation doesn’t feel right, it’s usually not right. It’s best to cut off contact, leave, or get help while you can.

2. It’s your right to say “No.” Your time, your life, and your body are gifts – and it’s your job to protect them, according to the authors of the bestselling book Boundaries. They declare no as the most basic boundary-setting word. It tells people that you exist apart from them; you are in control of you.

Motive is quickly revealed by someone’s response to your no. People who can respect boundaries will love your will, opinions, and separateness. People who can’t respect them will only love your compliance, your yes but not your no. In healthy relationships, no is a complete answer. You don’t have to explain or defend yourself.

Be strong when dealing with someone who tests you or picks on you. Take up for yourself and others. Strong personalities often back down, and may be impressed, when they feel they’ve met their match.

4. Your desires and needs are important too. One of my daughters used to rarely speak up in family decisions. She goes with the flow, and what hit me on one family vacation was how she rarely chimes in on even small choices like where to eat. When I asked why, she said, “I just like to make people happy.”

While I love her flexibility, I don’t her want her to lose herself and become a passive participant of life. Since then, I’ve asked for her opinion and encouraged her to speak up, even as her sisters voice strong opinions. In healthy relationships, every voice is heard and valued. There is room for different opinions as the group learns to compromise.

5. Your voice matters, and finding your unique voice takes time. The hallmark of a great voice is authenticity. A book by Dr. Seuss is very different than a book by Flannery O’Connor – yet both voices are true to them.

A priest who used to work in seminary at the Vatican once told me they spent an entire year working on voice. How someone speaks at the podium, he says, should match who they are in real life. Finding your unique voice is a process, and it will be shaped your experiences, beliefs, personality, and worldview.

One upside of 2020 is how it’s given our youth time to reflect. Your daughter, who may not have tapped into her inner world before, can use this season of social disconnect to identify her authentic voice without the influence of others.

6. The most effective voices speak the truth in love. I’ve yet to see anyone change someone’s mind by being hateful, yet this is the norm online. This is how many present their argument, creating division and angry mobs.

Encourage your daughter to aim higher. Teach her to raise her argument, not her voice, and make people THINK. As Maya Angelou said, “The idea is to write so people hear it and it slides through the brain and goes straight to the heart.” Choosing the right tone – and appealing to logic or emotions with an underlying sense of love – can lead many people to a change of heart.

7. Rather than tell people what to think, tell your story. Let the facts speak for themselves. It’s understandable why books like Educated and The Glass Castle become runaway hits. Both authors endured horrific upbringings. They had reasons to feel cheated and bitter. Yet if they’d written their stories in a bitter tone, readers would feel attacked and stop reading.

Instead, they matter-of-factly tell their stories. They allow readers to draw their own conclusions, become enraged for them, and passionately root for them. People are smart, and sometimes the best catalyst for change is a true story that makes people feel and become enraged on someone else’s behalf.

8. Think before you speak – and get your facts straight. A young woman started an online petition to call out an organization. Her intentions were good, but she didn’t know how this organization was already in talks of changing direction. If she’d had a private conversation with its leaders before making a public scene, she could have been accurate and become an ally for change.

Social media makes it easy to speak too soon. People lose credibility by putting the cart before the horse. Do your research, don’t jump to conclusions, and have private conversations to inform your public conversations to be a voice that people trust.

9. Let your emotions work for you, not against you. Some anger is justified, yet girls are often taught that anger is bad or socially unacceptable. Consequently, many don’t know how to express it, work through it, or re-purpose it. They internalize or externalize their anger, taking it out on themselves (through self-destructive behavior) or others (by acting like a bull in a china shop).

Effective voices have emotional intelligence. They can identify their feelings, sit with them, and find healthy outlets. They don’t act on raw emotions or knee-jerk responses. They can have civil conversations to express their feelings and work through conflict. They can re-purpose their pain into art, activism, or helping others.

Emotions are good followers – yet terrible leaders. Tune into your emotions and feel them, but don’t let give them the microphone until they’ve evolved.

10. Speak up for yourself, and you’ll find the strength to speak out for others. Girls who use their voice are better equipped for life. They can self-advocate with a teacher, tell a friend she hurt their feelings, let a guy down, and not be talked into choices against their better judgement. They can admit their dreams and struggles and share stories to inspire others. They won’t expect anyone to be a mind reader.

By speaking up for themselves, girls gain the courage to speak up for others. They learn to be a voice for the voiceless, an activist, or a positive influence in their social circle, where they’ll make the deepest impact.

Every girl is different, and every girl should know that her voice matters. Whether your daughter is shy or strong, sensitive or abrasive, quiet or outspoken, a little guidance can go a long way.

And should your daughter find herself in a tricky situation, needing a voice that means business, I hope she rises to the occasion. I hope she finds the strength to stand up for what is right and not let anyone be treated as less than they deserve.

Thanks for reading this message. If you enjoyed it, please share it on social media or listen to it audibly on the Girl Mom podcast.

On Aug. 18, my new book Love Her Well: 10 Ways to Find Joy and Connection with Your Teenage Daughter releases. It’s gaining fantastic early buzz, and by pre-ordering, you can receive amazing incentives here. Order through Amazon or through Audible, where I read the book to you. What a privilege it’s been to narrate my first book for moms!

My two books for teen girls, 10 Ultimate Truths Girls Should Know and Liked, are used widely across the U.S. for group studies. For more posts, subscribe to this blog or join me on Facebook, Instagram and the Girl Mom podcast.

5 responses to “Help Your Daughter Find (and Use) Her Voice”