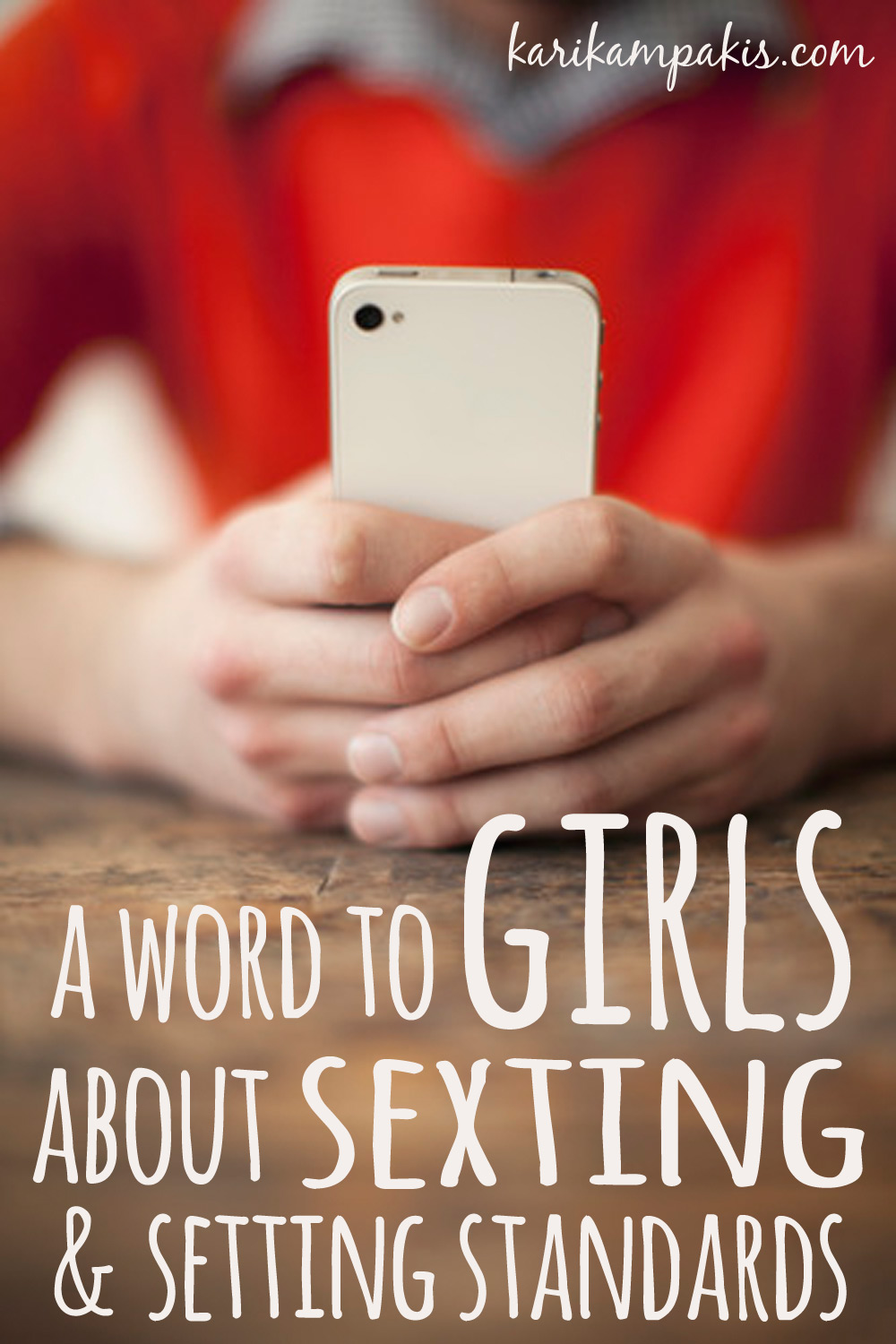 When you write a book for teen and tween girls, you learn a lot about teen culture. Much of what you learn will absolutely break your heart.

And while I don’t love controversy – or being one to initiate awkward conversations – I do love girls. Because of that love, I’m venturing out of my normal blogging zone to address an issue that parents and adolescents should discuss.

And that is, sexting.

Now, some parents assume that only “wild” girls sext. They’ve told their daughters to never-ever-ever-EVER send a provocative picture to anyone, and having had this conversation, they don’t worry about their child joining the party.

But what many adults don’t realize is how today’s teens are being told that sexting is normal and no big deal. Everyone does it. Sexting may be prevalent, but it’s not healthy. It isn’t right or good either, and it certainly won’t lead girls to the one thing they want most…LOVE.

I’m no expert on sexting, but I have concluded that somehow, it’s finagling its way into teen culture (and into the adult dating culture too, a whole other story). It’s becoming common enough that even smart, together, and generally deemed “good” girls are falling into the trap.

Raising your daughter in a Christian home, sending her to a school with high moral standards, filling her up with love and affirmation – while these things are great and certainly beneficial, they offer no guarantee that a girl won’t make that 5-second mistake.

As anyone in the loop can tell you, it can be shocking to learn who has sexted. Even girls who normally show good judgment have been known to send a compromising picture that is totally out of character.

My point in writing this isn’t to stir up panic, suspicion, or hostility toward today’s girls. I’m simply try to raise awareness of a reality that’s gaining ground in this age of technology.

As writer Allison Slater Tate brilliantly pointed out in this article, we’re the first generation of parents raising kids in “the age of iEverything.” A lot of the challenges and problems we face are unprecedented, and we’re struggling to figure out our parenting strategy.

Unlike other parenting issues, where we can glean wisdom from the parents ahead of us, there’s no road map to help us navigate the current maze of technology. Rules keep changing, and keeping up is hard. Five years ago, the rule of thumb for monitoring a child’s online activity was to keep the family’s one computer in a central location like the kitchen.

But now? Now technology is portable and more affordable. It’s possible for every family member to have their own iPhone, iPad, and laptop.

This makes today’s teens and tweens the first generation of adolescents to learn lessons the hard way about what can happen when one impulsive text or post gets shared. What starts as a private message can quickly go public and spread to the ends of the earth.

I don’t have answers, but I do have some thoughts. And if you’re ready to start or continue dialogue with your daughter regarding the sexting trend, feel free to share these with her.

1. You were made for MORE than the lifestyle this world pushes on girls. Your life purpose is to become a woman of God – not some hot & sexy thing for boys to lust over. Love says, “I can wait.” Lust says, “I have to have it now.” A boy who genuinely loves you won’t need a compromising picture of you. He’ll know you were made for more than that and recognize a beauty that runs deeper than appearance.

2. When you set a high bar for yourself, the best guys rise to the challenge. One thing this generation needs is more girls willing to set high standards and not give boys what too many are asking for – i.e. hook-ups, casual sex, and nude/semi-nude pictures. Girls, don’t stoop to the level of boys with these expectations; make them rise. Or better yet, look for boys who already hold themselves to high standards. These are the guys who will treat you well and go places in life. These are the protectors who will have your back.

Setting a high bar weeds out the users because they won’t waste their time on you. They’ll go prowling for other girls who might compromise their values in a misguided quest for love.

3. Trust that inner voice that tells you, “This is a bad idea.” Deep down, you know right from wrong. God has planted in you a desire to honor Him, and when you’re tempted to stray, your conscience will raise red flags. Even if “This is a bad idea” crosses your mind for only a split-second, it’s worth tuning into. The world and your peers can get loud and persuasive as they scream in your ear, but it’s that quiet voice inside you that deserves the closest attention.

4. Boys talk. And it is safe to assume that nothing you do with a boy or send to a boy will be kept confidential. What makes a teen boy “the man” among his buddies is sexual conquest (a false idea of manhood covered well in this book). Particularly in the locker room, guys share very intimate details about girls to make themselves look like a stud.

If more girls understood this, I truly believe many would choose differently. They wouldn’t be so quick to play into male fantasies.

Even if a girl’s sexted picture isn’t shared online, it will be seen by other boys. As one 10th grade mom told me, her son was very disturbed by a locker room scene where athletes were passing around their cell phones to show off topless pictures of their girlfriends. When her son told them to cut it out, they turned on him, asking, “What’s wrong with you? You don’t like girls? Are you gay?”

It makes me angry and sad that boys who do the right thing risk ridicule like that. It also goes to show that boys face as many complicated pressures as girls.

5. Thanks to group texts – which most teens keep handy on their phone – a picture can travel at the speed of light. In three seconds, a sexted picture can be sent to 90 members of a football team. If just a few of those 90 boys also forward it to group texts, the photo could be on 500 phones in a flash. That’s just the beginning.

6. The world can be cruel and heartless to girls who get caught in sexting scandals. The aftermath creates a nightmare. While some mistakes are met with mercy and compassion, this mistake typically results in ridicule, rejection, and shaming. Even if the girl is a victim, betrayed by someone who promised privacy before she sent the picture, she may be ostracized at school, written off by friends, and judged harshly by peers and parents. This isn’t the kind of fame or attention you’d wish on your worst enemy.

7. Once you send a picture, you can’t take it back. It’s out there in cyberspace, a digital tattoo you can’t erase. A good rule of thumb when using technology is to never send anything (picture or message) that you’d be mortified to see splashed across the front page of your local newspaper. This includes texts, Snapchat, etc. If you’re in question about something, consider how your grandmother or youth leader might react. If the thought of them seeing or reading it makes you cringe, you have your answer.

8. Anyone who pressures you to send inappropriate pictures is someone you don’t need in your life. I don’t care if it’s the most popular boy in school. Or the steady boyfriend who gives you a guilt trip because all his friends’ girlfriends send racy photos. Or the fun group text where guys suddenly threaten to kick out any girl who doesn’t contribute a sexy shot. Or the friend who pesters you to loosen up and just do it because life is short and YOLO.

These kind of influences drag a person down. They are the relationships that, with time and maturity, you’ll recognize as toxic and destructive.

9. Sexting may capture a boy’s attention, but it will not capture his heart. It won’t make a boy love you, respect you, or crave a relationship. If a relationship does result, it probably won’t last because it’s only a matter of time before the novelty of you and your body wears off and he moves on to the next hot babe.

10. It’s better to be alone for the right reasons than with someone for the wrong ones. Many girls mistakenly believe that to have a shot at romance – or to keep a man – they have to play the game. They assume they have to join this culture of hooking up, sexting, and shallow relationships, or else they’ll get left behind.

But the truth, this bus is headed for NOWHERE. No good can come from it…so getting left behind a gift. Instead of chasing boys, chase your dreams. Invest in yourself and your relationship with God, and He’ll bring the right boy into your life at the right time. There’s nothing more appealing than a girl who has already created an amazing life for herself and a world that a boy wants to be part of.

Parents, let’s circle the wagons around today’s girls. Let’s seek to understand the lies they hear and the norms of their daily environment. Most of all, let’s not shy away from the awkward conversations these girls need (and we need too) to wisely navigate uncharted waters. By being proactive and having frank conversations, we might get ahead of potential problems and equip our daughters to make solid choices as they prepare for a life without adult surveillance.

Girls, stand firm together. Encourage each other to set high standards and stick to them. When a sister messes up, love her through her mistake. Remember how tough it is growing up in a virtual fishbowl, where there’s no room for error because every move you make can be documented and publicized. Discover your strength in numbers and remind each other – again, and again, and again – that you are worthy, beautiful, and made for so much more than this world will have you believe about yourself and other girls.

You are a woman of God, and despite any growing pains of adolescence, there are great things in store. God’s plan for you is better than anything you can imagine, and when you place your trust in that, you find all the love you need.

One response to “A Word to Girls about Sexting & Setting Standards”